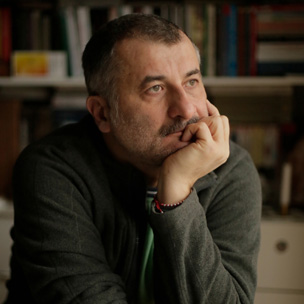 Born in Bucharest, Romania, in 1967. He studied painting and cinema in Geneva. Puiu is the director of feature films such as Stuff and Dough (2001); The Death of Dr. Lazarescu (2005), winner of the Un Certain Regard Award at Cannes Film Festival; Aurora (2010, 34th Mostra); Three Exercises of Interpretation (2013) and Sieranevada (2016). He also directed a segment of the collaborative film Bridges of Sarajevo (2014, 38th Mostra).

Nikolai, a wealthy landowner, places his country estate at the disposal of some friends. For the guests, time passes with rich meals, society games and by engaging...