Anjani is one of the countless migrants moving to India’s expanding cities. He lives with his heavily pregnant sister and her husband in a shack in New Delhi. His brother-in-law has arranged a job for him as a professional monkey repeller. Ever since the keeping of langur monkeys —the natural enemies of rhesus monkeys— has been prohibited, humans have taken on the tricky job of protecting tourists and preventing the cheeky rhesus monkeys from invading government buildings. But many Indians worship the monkeys as incarnations of the god Hanuman and reverently feed them, which only serves to make the animals even bolder. Anjani is afraid of the monkeys. On one particular feast day, the situation escalates and he resorts to unusual measures. 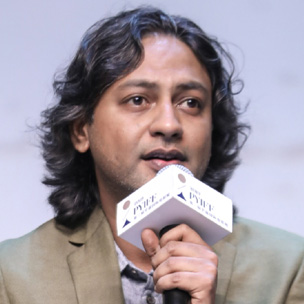 Born in Ranchi, India, in 1984. After graduating from the University of Delhi, he completed a master’s in film directing at the Film and Television Institute of India (FTII). His debut in direction was with the documentary feature- length A Very Old Man with Enormous Wings (2017). As well as making his own films and teaching, he is involved in the Ektara and Phase I film collectives. Eeb Allay Ooo! is his first fiction feature film.

In 2015, the Syrian boy Aylan appeared dead on Bodrum beach, Turkey. The image shocked and alerted the world to the refugee crisis. The film imagines what could...

Thirty-year-old Alexander never fell in love —or had never been able to fall in love. He finally sees in Paula, a vaudeville artist, the possibility to share his...

Five friends grow up in the middle of nowhere in Germany and have to decide whether to leave or stay after they finish school. Katja, Sascha, Benni, Laila and...