Five friends grow up in the middle of nowhere in Germany and have to decide whether to leave or stay after they finish school. Katja, Sascha, Benni, Laila and Schöller —they seek each other, they run away from each other. They kiss, they brawl. They love each other. A kaleidoscope of violence, love and loneliness where intimacy and pain go hand in hand. 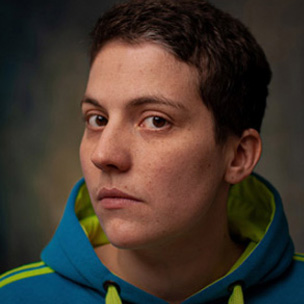 Born in Dachau, Germany, in 1992. She graduated with a degree in screenwriting from the German Film and Television Academy Berlin (DFFB) in 2017. Her short films, among them, Like in Africa (2014), Motten (2016) and What We Were (2018) have screened at several festivals. Naked Animals is her feature-length debut.

Iza is a doctor who lives in the big city. She decides that her mother, Anna, who is widowed and lives in a village, must move in with her. Mother and daughter have...

Thirty-year-old Alexander never fell in love —or had never been able to fall in love. He finally sees in Paula, a vaudeville artist, the possibility to share his...

Sylwia is a digital influencer and has thousands of followers, always eager for her physical exercises and fitness lifestyle. Although she has lots of admirers...